Version 3.1 has been released

A new version of LuckNews has been released to the Apple App store.  This new version is a relatively small update, but improves the user interface in several small ways.  This version is available for El Capitan (10.11) only.

There are several other small improvements and changes, you may or may not notice them.

If anybody should experience any problems, please let me know. 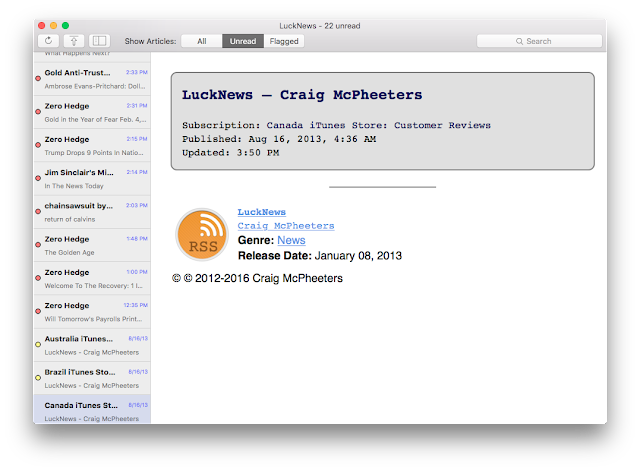 Version 3.0 has been released

Version 3.0 of LuckNews has now been approved and released by the Apple App store.  It should be available for download at the various countries app stores within 24 hours.

A lot of work has gone into this new version and I hope you all enjoy it.  Version 3.0 will only work on version 10.10 of Mac OS X - if you're running an older version...why?  The upgrade is free!

Among the larger changes to the app are:

As always, feedback is welcome.

Posted by Craig McPheeters at 7:29 PM No comments:

The in-app purchase facility in LuckNews has been broken since January 15th.  With luck, it should be working again within a few hours of this article being posted - perhaps a bit longer for apple app stores outside of the USA.

If you have been waiting to upgrade LuckNews to be able to support more than 8 subscriptions, then that should be possible very shortly again.  Sorry for the delay in getting this to work.

Part of the back story is...  I'm currently sailing.  While I'm away I won't have access to internet for long periods of time.  This happened to me in early January.  In Mid January my membership in the Apple developer program lapsed (oops!) and LuckNews was removed from the App Store.  I arrived in a port on the 16th, got access to wifi and noticed the problem.  I renewed my membership and then left the port the next day to continue my sailing.  LuckNews appeared back on the app store, unfortunately the in-app purchases didn't.  Bummer.  I believe I have just solved the final piece of the renewal puzzle and the in-app purchases should be back on the store soon.

Sorry for the inconvenience.

Posted by Craig McPheeters at 9:13 PM No comments:

The previous version, version 2.0.5 was done in a bit of a hurry in order to get LuckNews working for customers who had upgraded to Mavericks.  Since I wanted to get that release out quickly, I didn't add very much to the release.

Version 2.0.6 is a slightly larger release, although I suspect that most customers won't really notice any differences.  There was a lot of activity 'under the hood' of LuckNews.  The application is more solid in some important areas - even though you probably won't notice any difference, its just better.


One of the visible changes in this release is the addition of an Activity Window.  This window can be brought up by selecting the menu item in the Window menu.  The Activity Window gives you some insight into what LuckNews is doing when it goes to the network to do its work.  If you are finding a refresh very slow, this should give you insight into what the offending subscription is that is causing the slowness.  This is more or less an aid to help when things so wrong or for those who are technically minded - use this to help diagnose network problems.

A change you may or may not notice is that LuckNews has changed the way it saves its changes to its database.  In older versions, the database was updated infrequently.  If you forced LuckNews to quit (using the Force Quit menu item, not the normal Quit method) you might have lost changes such as the article 'has been read' status not being stored properly.  Now LuckNews saves its changes to its database continually.  You probably won't notice this...but its better now.

The refresh performance has been improved.  If you only have a few subscriptions, you may not notice anything.  If you have a lot of subscriptions, you may notice that refresh is faster now.  The refresh for my copy of LuckNews with the slow network I have where I am now went from taking over a minute to around 15 seconds.  You may or may not experience similar results.

One last thing I'll mention is that there have been improvements made to the update process.  I found that there were a few subscriptions which would constantly create new articles even though I had already read the article.  This is different from an article being updated by the author - some feeds were behaving poorly and the same article would generate multiple copies in LuckNews.  After examining what was going on in more detail, the problem turned out to be bad RSS data for some subscriptions.  But knowing it is bad RSS data doesn't really help users who are annoyed by the same article appearing multiple times.  I think I have found a way to deal with these bad feeds now.  If the RSS (or Atom or RDF) subscriptions you subscribe to follow the standards properly, they will work properly in LuckNews, as always.  If the subscriptions violate the standards, they should work better now.  Perhaps not perfectly, but much better...


There are a few other improvements in many areas.  There are also some major changes internally in some areas which I won't go into.

This is now the 14th release of the application.  Its come a long way since version 1.0 was release early this year.  Of those 14 releases, 12 were done in Seattle and this is the second in a row from California.  This will be the last USA version for some time - the next update will come from Mexico!

Version 2..0.5 was approved and has been released to the App Store.

The biggest feature of this release is that it now works on Mavericks.  I had many reports from customers who pointed out to me that LuckNews wasn't working properly on Mavericks.  I was able to download Mavericks a week ago and was able to fix the application quickly.  I submitted version 2.0.5 to the App Store on the 26th and it was approved today, the 31st.  That was a pretty quick turnaround by Apple.

Thanks you to everybody for being patient.  Many of you offered positive feedback about the app to me when you sent your note pointing out that there was a problem.  It was nice to hear from all of you!

In the last release I suggested that you needed to restore your in-app purchases in order for them to take effect.  It appears this may no longer be the case.  If after opening the LuckNews in-app store you see the product you previously purchased is being recognized, then you don't have to do anything else.

I have had two reports that restoring the in-app purchases has damaged the application causing the user to have to reinstall LuckNews.  This problem is out of my hands!  The in-app purchase restore functionality is handled by Apple.  If you run into this problem, please read this page so that you can copy your subscriptions to a backup location before re-installing:
http://lucknewsapp.blogspot.com/p/help-opml-backup-files.html

So please, if your in-app purchases are present, do not try to restore them again.

The problem with LuckNews being reported as being damaged is out of my control.  The restore functionality is handled by Apple.  I've reported this as a bug to them.

Aside from the Mavericks fix, I was also able to fix a problem in displaying HTML web pages for some sites in non-english languages.  For example, this is an example of a German subscription shown as HTML in the previous version, 2.0.4:

Note all the black question marks, which indicate text encoding errors during rendering.  The same page now renders correctly in 2.0.5:

The text for this site is rendered correctly when not viewed as HTML in both versions.

There are a few other small fixes as well.

As always, if you have any suggestions or improvements to LuckNews, please let me know.
Posted by Craig McPheeters at 6:38 PM No comments:

I've received a number of reports that LuckNews is not working correctly in Mavericks, Apple's latest version of OS X.  I will be upgrading to Mavericks in the next few days and will work on a fix.  Just to set expectations - the fix likely will not be available for a few weeks.

A partial explanation for the delay - I recently left Seattle where I was living for the last year and have been sailing down the west coast of America toward Mexico.  I am currently in Oxnard, California on my sailboat Luckness.  The wi-fi connection I have here is slow, it is going to take two days to download the 5.2G bytes of Mavericks.  Once that is complete, the Xcode update will take some more time.  While I am here in Oxnard I am also working on boat projects and my sailboat/home is currently torn apart inside to the degree that I barely have a flat surface to work on.  By early next week the boat will be back in the state where I should be able to work on programming projects again.

I remain committed to LuckNews, but as I travel over the next few years there will be periods when I won't be able to respond as quickly as I have in the past.

Sorry for the inconvenience and thanks for your patience.


ps.  Its cool that Apple released Mavericks for free!  Way to go Apple.


[update 10/26/13] I have just submitted an update to LuckNews, version 2.0.5, to the AppStore.  This version works on Mavericks and has a few other changes that some people have asked me for.  The normal review process for Apple has been a week long, and I expect that they are busy after Mavericks came out and so the app may take longer than a week for them to review it.  I expect the new version to be available sometime around November 4th?

Posted by Craig McPheeters at 2:13 PM No comments:

Version 2.0.4 is out - how to restore your In-App purchases

Version 2.0.4 of LuckNews was released today.  This is a small update to LuckNews, containing:


If you had earlier purchased additional subscription capacity in LuckNews, you will need to restore your In-App purchase in order for LuckNews to recognize your purchase.  To do this:


There is no charge for restore an earlier purchase - once you upgrade the capacity in LuckNews once, that purchase is good for all future updates.


Posted by Craig McPheeters at 6:55 PM No comments:

Where is Craig now?

Craig is sailing. Click here to see where he is.
Craig's sailing blog is here.